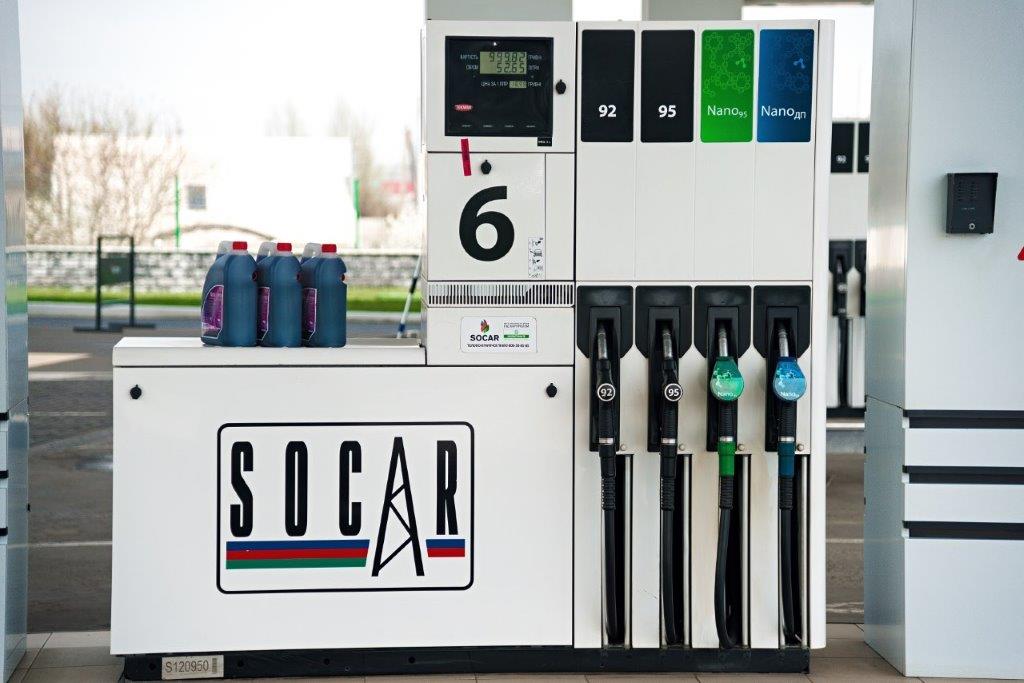 The boom in construction of new petrol stations in Ukraine has become a past, no one doubts about it. Nor that they completely stop deploying new and retrofitting old petrol stations, or rebranding them, or just replacing their depreciated fuel dispensers. But such a stir that used to be in the early 2000s has soothed down. Anyhow, to say that the market is low and stale won’t be right. One may judge for himself:  there were 396 retail fuel dispensers imported to Ukraine in 2018, in addition to 945 retail fuel dispensers sold by national manufacturers in Ukraine.

In total, in 2018, the Ukrainian market absorbed 1341 new retail fuel dispensers, that suggested that the market was active, and "the patient was very much alive and kicking." For comparison, in 2005 there were  2477  new retail fuel dispensers sold, but  at that time  the market  was in flux  with dozens of petrol stations deployed  a year. Moreover, a slew of newly- deployed  petrol stations accounted  for small, independent fuel retail operators, that now practically does not happen after takeovers in the market by domestic and multi-national petrol retail chains.

A total of 396 fuel dispensers for retails were imported into to Ukraine in 2018. Of those, there were 330 new fuel dispensers and 66 used and retrofitted ones. Despite the active deployments of autogas fueling stations, the number of LPG dispensers sales was quite modest, only 86 pieces, or 22% share in dispenser imports. The most popular brand of imported retail fuel dispensers in 2018 remained unchanged, and included the products of Tokheim, closely trailed by the ones from Gilbarco Veeder-Root, and Tatsuno products. Those were the top three capturing sympathies of Ukrainian fuel retailers. It should be noted that the products of later famous Japanese brand in Ukraine were mainly autogas dispensers. 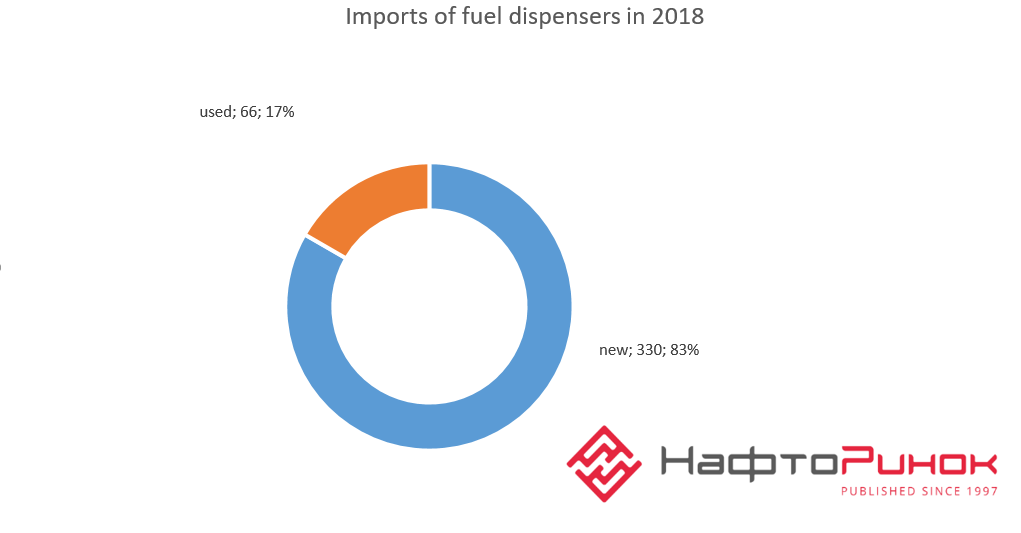 Ahead of the whole planet

In 2018, the most popular manufacturer of fuel dispensers among Ukrainian fuel retailers was the British brand Tokheim. Founded in 1901 in Texas, USA, the company is now part of the international consortium Dover Fueling Solutions (DFS), with a plant for the production of fueling equipment located in the Scottish city of Dadi. For many years the company has been one of the largest manufacturers of fueling equipment for the petroleum products market, both in Europe and in other countries.

In 2018 there were 130 fuel dispensers  of this brand imported, which accounted for a 33% share in total imports of fuel dispensers into Ukraine , or a 10%  share in total  fuel dispensers  sold in that year. In Ukraine, the trade and service representative of Tokheim is the Odessa-based company Juventa LLC, headed by Alexander Perov. The Juventa LLC brought 125 dispensers, with the other five imported by the Zola LLC. The main end-users of Tokheim-made dispensers were the Ukrainian retail fueling station chains, such as OKKO, UPG, and other independent fuel retail operators. According to Alexander Perov, in 2018, in addition to fuel dispensers, they spotted the demand for fuel gages, pump-meters, versatile equipment for car service stations and car washes. 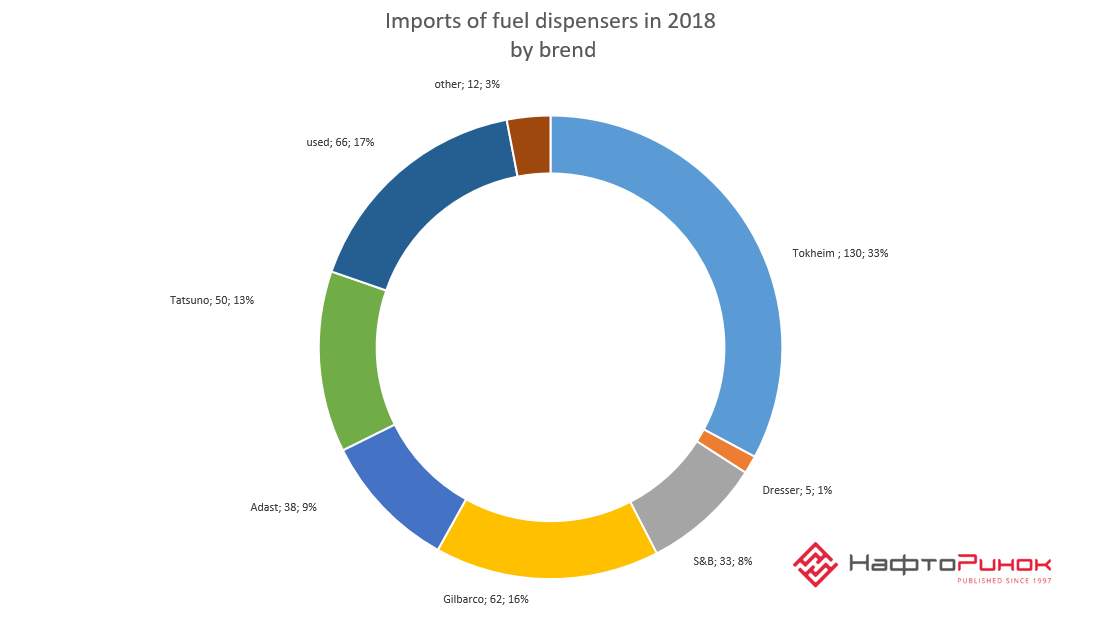 In 2018 there were 62 dispensers of this well-known German brand, incepted as far as back in 1870, imported into Ukraine. This level of supplies secured for the company second place in the ranking: 16% of all imports and 5% of all sales of retail fuel dispensers. That was quite a significant indicator. The representative of Gilbarco Veeder-Root in Ukraine is the Odessa-based Amatek LLC, which accounted for all deliveries of the brand in Ukraine. According to the company's CEO Oleksandr Potolov, the main buyers of Gilbarco Veeder-Root were the fuel retail chains run by SKY, OKKO, BRSM-Nafta, SOCAR, Nadezhda and others. In addition to fuel dispensers, fuel gauges by Veeder-Root, Fafnir, and many other gage manufacturers were in demand.

The products of the Japanese company Tatsuno, formerly known in our country under the brand Tatsuno Benc (produced at the joint Czech-Japanese enterprise), were not very frequent in the Ukrainian market. Although, in terms of quality and reliability, this equipment has always deserved only the best reviews. In 2011 the Japanese side bought out the Czech stake in the company and renamed the company as Tatsuno Corporation. In 2018, there were 50 fuel dispensers of this manufacturer were imported intoto Ukraine, which provided a 13% share in total imports and a 4% share in total sales of fuel dispensers in Ukraine. All the products imported and sold were intended for LPG catering.

The Czech to the core

Last year, the Croatian company Scheidt & Bachmann exported to Ukraine five autogas dispensers, 12 multi-product (petrol / diesel / LPG), and 16 gasoline dispensers columns. A total of 33 pieces of equipment secured for the company an 8% share in total imports of retail fuel dispensers into Ukraine . It should be noted that the Croats, in addition to high quality advantages of their equipment, are known for the flexible integration of their fuel dispensers. Only from this manufacturer it is possible to order practically any configuration of fuel dispensers.  Want a diesel, AdBlue, coupled by two LPG nozzles, or something else - not a problem. The dispensers from this manufacturer are brought into Ukraine last year differed in varieties of functions. Real multi-product points of sales that allow one to cater absolutely all types of fuels with a single dispenser.

One may still remember the times when imports of fuel dispensers of this brand numbered in the hundreds, and in some years exceeded a thousand of pieces. But something went wrong then. A number of changes in the owners of the plant, a change in the model range, almost scarce advertisement in Ukraine and networking  activities led to the plunge  to mere  five fuel dispensers  imported into Ukraine in 2018. Let's call this volume a 1% market, so to speak,  and honor of the company’s past merits. Wayn's representative for many years was LIGIR, one of the oldest vendors in the retail fuel station market, which ended its existence in 2018. In 2017 Wayn was acquired by the international consortium Dover Fueling Solutions (DFS), and the production of dispensers were relocated to Scotland,  to Tokheim main plant. It is still difficult to judge the effectiveness of these changes, but we hope that in the near future this brand will regain its lost positions.

Several companies imported 12 LPG dispensers for their own fuel retail operations. Those were fuel dispensers of Polish, Turkish, and Bulgarian origin. Those amounted to a 3% share in total number of fuel dispensers brought into Ukraine in 2018. In fact, it is difficult to call that supply of dispensers other than labeling it as "exotic". There are domestic producers in Ukraine, the quality of whose products is not lower than the Bulgarian and Turkish models. Moreover, the cost is more competitive.

Those that were in use, old, renovated, - whatever one invents to taunt the used fuel dispensers in Ukraine. And, to be honest, it seemed that the market for this type of equipment has come to oblivion forever, and there is no demand for such equipment at all in Ukraine. But, apparently, due to deteriorating economic situation in the country, the demand for retrofitted fuel dispensers it resurged again and aroused interest of fuel retailers. The later assumed that once  there are companies that can put pre-owned  dispensers  into order and continue to serve them, then why not to try this saving option as well? Mostly this option is a cost effective and a save solution for fuel station with low traffic and small commercial vehicle fleets. In 2018 a total of 66 used fuel dispensers were imported into Ukraine. This volume of deliveries accounted for a 17% share of fuel dispenser market of Ukraine. The main suppliers of pre-owned fuel dispensers were such companies as RecordMotorService (49 used dispensers) and Crocus Auto (12 used dispensers).

It has long been pursued by domestic manufacturers of fueling equipment to occupy a worthy place in the Ukrainian  petrol and autogas retail. Gradually, year after year, they increased production, perfecting quality and functionality of their products. Noteworthy, all that was without any help from the state. All those endeavors were duly rewarded with  945 fuel dispensers  sold to domestic fuel retainers. Thus, the share of Ukrainian-made fuel dispensers in the domestic market surged to a 70% market share in 2018. One should , first of all, recognize the work by the Shelf LLC and the Slavutych LLC, as the two prominent national producers of fuel dispensers. 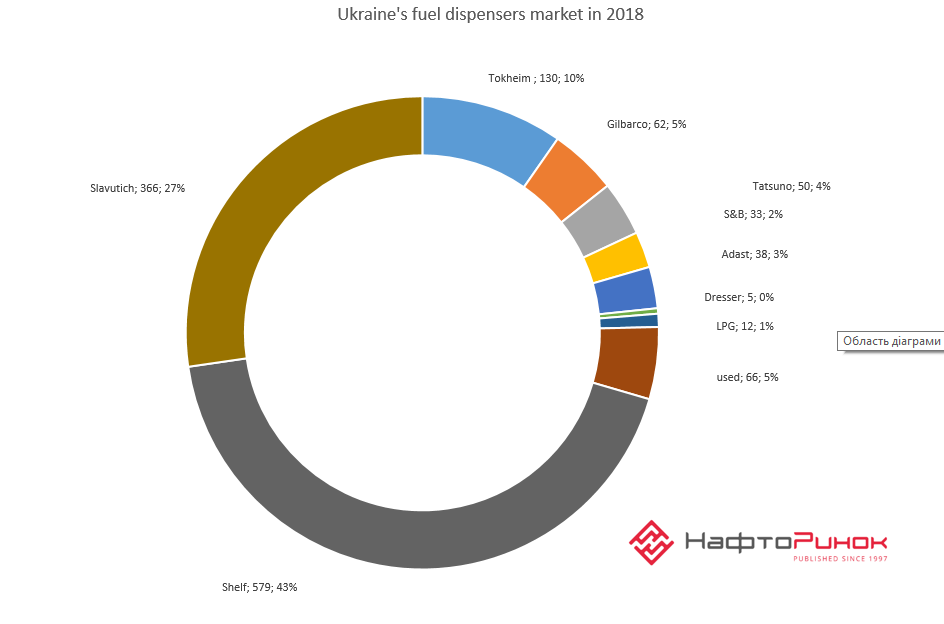 Founded in 1999, the Shelf LLC today produces a wide range of fueling equipment. In addition to liquid fuel and autogas dispensers, its lineup includes  CNG  dispensers, tanks, tank semi-trailers, and much more. The company is now experiencing a rebirth: hostilities in the Donbass in 2014-2015 forced them to relocate to Kyiv, where most of their rescued workers and equipment were moved. The qualification of the staff and the quality of the equipment made it possible to restore production and regain their disrupted market share.

In 2018 the company produced and sold 422 liquid fuel dispensers, 137 autogas dispensers, 3 multi-product dispensers for catering  liquid fuels and LPG, 4 pieces of  CNG dispensers,  and 13 oil dispensers. In total, the company sold 597 pieces of equipment, which was a 43% share of the entire Ukrainian market for fuel catering equipment. As Armen Kechiyan, the company's director, told to NaftoRynok, the main customers of their products during the last year included fuel retail chains by Motto, Glusco, BRSM-Nafta, Avantazh 7, Mango, and many others. In addition, interest in modular and mini-auutogas fueling points has revived as of lately.

According to Armen Kechiyan, the market is quite lively and dynamic, operators are actively interested in new equipment. According to preliminary data, the FY2019 was even more productive for Shelf. 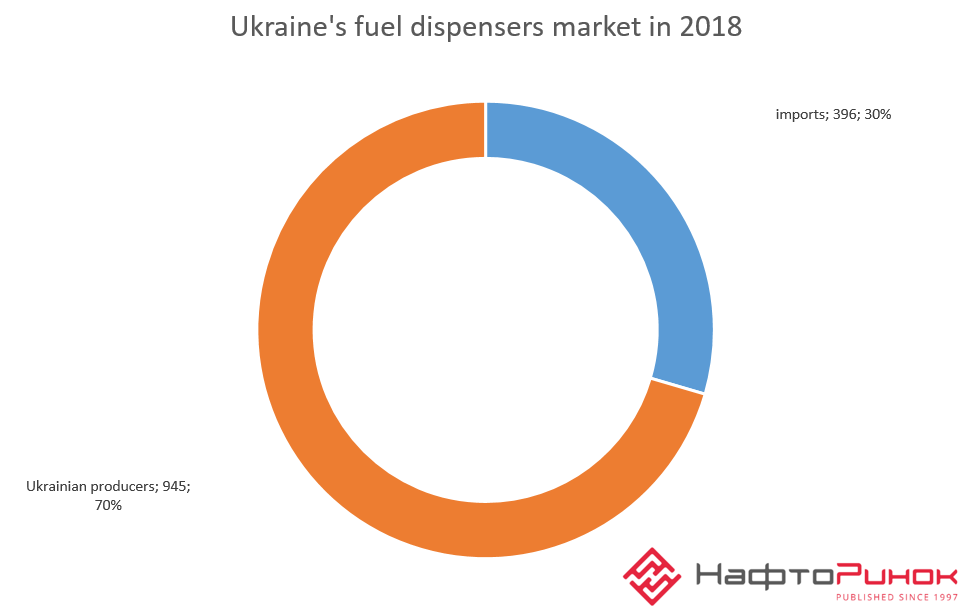 The Kramatorsk-based JSC Slavutych was created in 1989. The company produces quite wide range of equipment for fuel stations and petroleum depots. In particular, the JSC Slavutych launched AdBlue and multi-product  dispensers for catering  liquid , autogas, and CNG.  The year of 2018 brought to the JSC Slavutych  sales of 366 dispensers, of which 325 traditional dispensers, 37 autogas and CNG dispensers, and 4 oil catering dispencers. This volume of production provided the company with a 27%  share in the Ukrainian market for retail fuel dispensers. Sergey Chernyavsky , the Deputy Director of JSC Slavutych   said that over the last year the main buyers of the company’s products  were the fuel retail chains  run by Nadezhda  LLC and numerous small independent fuel point operators.

There were many orders for the company to equip the fueling points by cargo transportation companies, agricultural holdings, open-pit mining companies, and other commercial automotive fleet companies. In 2018 it was a high demand for columns equipped with an identification system, i.e. for commercial automated dispensers at their own for internal fueling points by enterprises. That aside, the company notes that in 2019 became more effective, because the demand for their products remained steady at a fairly high level.

Almost all importers and manufacturers of fueling station equipment were convinced that 2019 in terms of supplies became even more prospective than 2018. In addition, changes in legislation have stimulated the market for gaging fuel in tanks. Activity in that market segment resurged, and, therefore, it will move on and develop. Moreover, amid growing profitability of fuel retail chains of unprecedented high rates, their operators generate funds, that means they will be able to afford re-equipment and modernization of  fueling points and stations  to sustain operations of their chains.