The long gasoline minus

Last year, Ukrainian gasoline market lost a quarter of its volume. NefteRynok has decided to summarize import deliveries, as Ukraine heavily depends on products made overseas, accounting more than 80% of country’s consumption. Economic depression and low level of the purchasing power had the major effect on the gasoline market
18:24 / 08 лютого, 2017
Микола Сичов 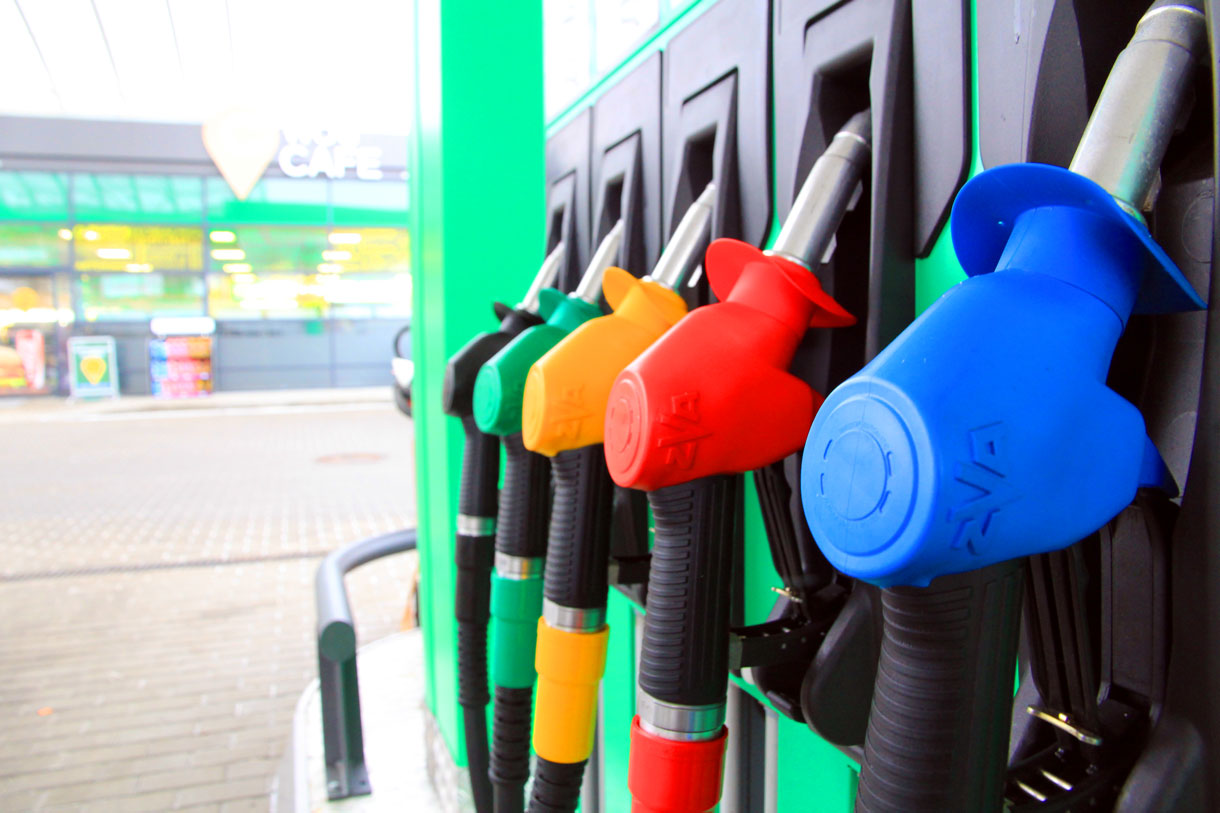 Everyone knows that sales of the oil products through the fueling stations are the litmus paper of the lingering economic crisis in Ukraine. According to the official data, in 2015 the gasoline sales has fallen by 24,1% (from 2,73 to 2,07 million t). The same happened with gasoline deliveries from abroad. In accordance with UPECO’s data, the volume of imported gasoline comparing to 2014 has decreased by 31,7% (or 650 thd t), from 2,05 to 1,4 million t.

It should be mentioned that the group of companies “VETEK”, which was out of view, stopped smuggling in January-February 2014. Over those months “VETEK” had been importing only about 2 thd t. Thus we can reasonably compare the results in 2014 with the totals in 2015.

Last year the deliveries from different countries have declined due to the crisis in our country. But nevertheless, the national market is geographically diversified. More than 10 refineries from neighboring and distant countries are continuing to supply Ukraine with gasoline. The main cause of such trend is the crisis in the national refinery industry. For example, in 2015 Ukrainian traders satisfied the consumers with having gasoline import not only from main suppliers. Also there were deliveries from Hungary, Greece, Serbia and even Slovakia.

The fuel diversity
For the reporting period the structure of gasoline import hasn’t changed. As a rule the import of A-95 gasoline was holding the leading position and was 62,8% of the whole imported volume. A-92 occupied the second place (36,9%) and A-98 took the third place (0,3%). The main supplier of A-92 was Lithuania and Byelorussia. Since September 2015 when Mozyr oil refinery has begun to produce A-98, “Belarusian Oil Company” imported not large amount of this fuel in Ukraine. Those deliveries were directed to the net of fueling stations called UPG. 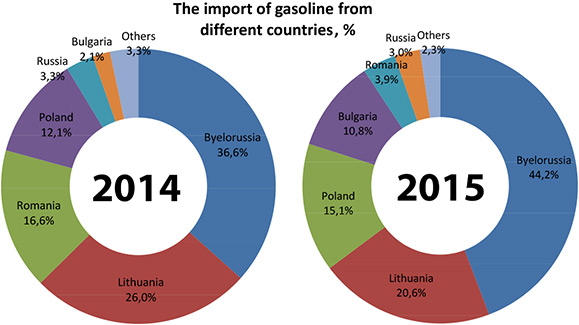 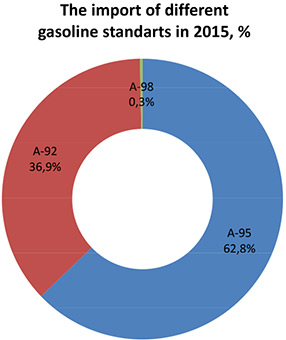 In 2015, 85,2% of the octaine resource was delivered by railway, 14,6% - by sea and only 0,3% - by automobile transport. Within the whole import, 44,2% or 619 thd t of gasoline were imported from Byelorussia. But in 2015, this country declined the amount to Ukraine by 17,6% (-132 thd t). The main supplier was «Mozyr Oil Refinery» which had provided Ukrainian customers with almost 92% of gasoline. The remaining quantity of fuel was dispatched by the oil refinery called «Naftan». The highest level of «Naftan» deliveries was taking place from October to December 2015.

The readers can be interested in the following fact. More than a half amount of imported fuel from Belarus was the A-92. It’s not surprising because there is the widely spread practice to use A-92 (produced by Mozyr refinery) with gasoline additives to get A-95. Such product isn’t of the proper quality and its manufacture can scarcely be called legal.

Lithuania held the second place within the whole import. Its fuel volume has reached 20,6% (288 thd t). Last year “Orlen Lietuva”, which owns Mazheikiai oil refinery, has decreased its import by 46%. In spite of the Byelorussians, the Lithuanians dispatched to Ukraine more than 50% of A-95.

In 2015 Poland has moved swiftly to the top three suppliers, having taking the place of Romania. It dispatched 212 thd t (14,6%). Over the reporting period Plock refinery, owned by “PKN Orlen”, was supplying only A-95 gasoline. The variety of Polish gasoline buyers wasn’t wide due to regional and logistic peculiarities. The main contracts were concluded by SOCAR, OKKO and WOG as they had developed fuel station networks in the West of country.

Another novice within the top five deliverers was Bulgaria. It has increased the export in Ukraine more than by 3 times to 151 thd t. The growth of A-95 deliveries from Burgas (“Lukoil” refinery) was caused by “Privat” demand. That consumer was the exclusive buyer of Balkan resource.

The last top importer was Rumania. In 2015 the import from this country set an anti-record, having declined from 340,6 to 54,7 thd t. One of the main reasons of such negative trend has become the closing up of “Rompetrol-Ukraine” business. The company was the supplier of “Petromidia” refinery fuel and belonged to “KazMunayGas”. Also it should be noticed that “Lukoil” has withdrawn from Ukrainian market. Russian company possesses Rumanian “Petrotel” refinery and has supplied “Privat” group with gasoline. On the back of such events “Privat” has changed its supplier for Bulgaria.

The Russian Federation completed the mail circle. But this country hasn’t been distinguished by active gasoline deliveries for a long time. For example, in 2015 the Russia exported only 42,2 thd t that was less than in 2014 by 36,9%. It should be noted that the principal buyer of the northern neighbor’s gasoline has become “TNK-Industries Ukraine”, which is the part of “Rosneft” structure. In 2014 36 thd t (mainly A-95) were delivered to TNK, but in 2015 the amount has hardly reached 25,8 thd t.

During the first six months 2015 the active consumer of Russian resource was WOG (“West Oil Group”). For instance, from March till August the company had been importing about 11 thd t of gasoline from Orsk refinery (Public Stock Company “Orsknefteorgsyntez”). Since November 2015 when Russian officials have forbidden fuel export to Ukraine in order not to admit fuel using for the military forces, the deliveries stopped completely.

Traders have gone into the red
Last year the variety of main gasoline suppliers has changed. Totally about 80 companies imported this oil product. The continuing decreasing of gasoline import was the key trend in 2015. Besides, the principal players have managed to hold their positions during the crisis. 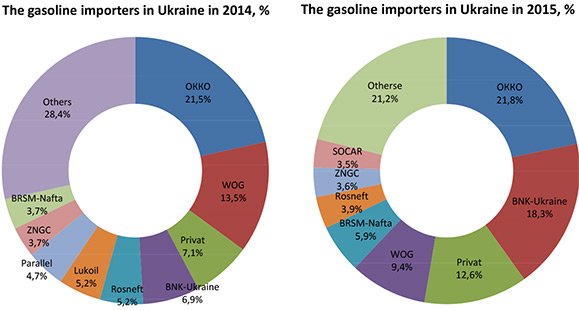 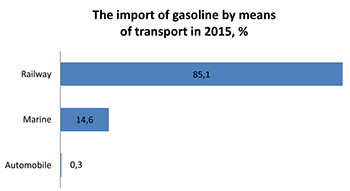 “Concern Galnaftogaz” is the biggest retail seller of gasoline through the network of fueling station OKKO. This company declined its import proportionally to the sales. The import indicator lost 31% and reached 304,6 thd t. The firms which are included in “Kontinium” (the group of companies that manages the network of WOG fueling station) decreased their import by 52,6% (from 277 to 131,2 thd t). Also it should be noted that over the accounting period the large portion of fuel for “WOG Retail” was provided by “BNK Ukraine”. Ukrainian sub-company of Byelorussian state enterprise (“BNK Ukraine”) delivered fuel not only to WOG, but also to “Alliance Oil Ukraine”, OKKO, “Ukrpaletsystem”, “Nadezha”, the group of companies “Mango” and for others market players. The Byelorussians also imported gasoline resource for the following small wholesale by themselves. In comparison to 2014, “BNK Ukraine” has increased its volume to 256.6 thd t. Also “West Oilgas Company” (“Zahidna naftogasova kompaniya”) was on trend of annual average descent. As a result, the company has reduced its import volume by 36,6%.

The import of “TNK-Industries Ukraine” (the sub company of “Rosneft”) has reduced by 49,5% (from 107 to 54,1 thd t). Also the volume of cargo execution by “Alliance Oil Ukraine” has declined more than a half (from 66 to 30 thd t). Moreover, this company was going through the lingering transformation period. “SOCAR Energy Ukraine” has shortened the foreign fuel deliveries by 11% (from 54,3 to 48,3 thd t). By the way, the import of capital network KLO has reduced by 6%.

As above mentioned, since 2014 “Privat” group has become the permanent importer. The affiliated firms to this group have been active buyers of foreign A-95 gasoline until October 2015. Comparing to 2014, the group, which has the control over the biggest network of fueling stations in Ukraine, has enlarged its import by 17% to 176.1 thd t. Last year the lion’s share of marine gasoline deliveries was executed by “Privat” from Bulgaria, Romania and Greece.

But since October 2015 “Privat” has discontinued its foreign cargo execution. The main reason was the crude oil purchase by Kremenchuk refinery, which supplied “Privat” network. Kremenchuk oil products have substituted the imported fuel.

Despite the general trend, the company-suppliers of “BRSM-Nafta” network have increased the import by 8,3% to 83 thd t.

Also the group of companies “Factor”, which belongs to Sergiy Tishchenko, has became active in 2015. For instance, “Favorit Oil”, “Ukroilproduct”, “Welltime” and the state “Ukrtransnaftoproduct” (controlled by the loyal to “Factor” management) imported together about 15,6 thd t of Byelorussian and Lithuanian gasoline.

Besides “the mirror images” of “Alliance Oil Ukraine” had a shot at gasoline import, in spite of their specializations in diesel deliveries. For example, “Alliance Enegro Trade” has imported 4 thd t of Mozyr and Navapolatsk A-92 gasoline and “Alliance Oil Trading” has bought 2,3 thd t.

It should be noted one more momentous fact. Last year several large importers, such as “Lukoil”, “Rompetrol Ukraine” and “Allenergo” withdrew from market. “Lukoil” has closed up its business due to selling its assets in Ukraine. “Rompetrol Ukraine” has discontinued its operational activity thanks to “KazMunayGas” intention to sell it. “Rompetrol” import in 2015 was 10 times smaller than in 2014. “Allenergo” disappearance was thrown a cloak of idle rumors. According to different sources, “Vitera Trade” and “Business Solution” picked up the baton form “Allenergo”, that’s why these companies were associated with trader that has terminated its business.

It should be added that since June 2015 the foreign investment enterprise “AMIC Ukraine” has taken place instead of the withdrawn “Lukoil”. The company bought the network of fueling stations from “Lukoil” and managed it. Over six months “AMIC” has imported under 26 thd t of A-92 and A-95 gasoline.

Having concluded all the above mentioned, we can say that the market of imported gasoline exhibited a decreasing trend. The smuggling and the mixed gasoline production have replaced the reduced amount of official import. The smuggled gasoline was importing constantly through the southern ports during last year. The mixed gasoline (f. e. gasohol) has been legalized by the state several years ago after that its producers got technical specifications. At the beginning 2016 the officials has understood their “fault” and imposed the excises for fuel components, which are added to the mixed gasoline.

Generally speaking, the reducing of gasoline import is one of the main problems for Ukrainian wholesaler and retail companies. They lost their volume of sales. According to the market players’ information, the market bottom hasn’t reached yet. The further traders’ forecast doesn’t encourage optimism due to the general falling trend in Ukrainian economy.